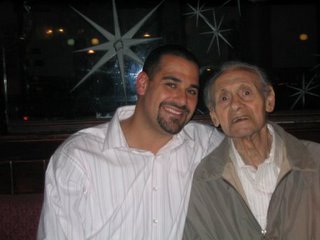 My grandfather passed away on Monday (February 20th), so yesterday I said good-bye to him for the final time. As sad as death itself is, I don’t feel completely sorrow today. I know this probably doesn’t sound right – but let me try to explain.

In his 92 years on this earth, my grandfather lived a damn full and complete life. I thought my mother and uncle did a perfect job recapping it in their words at the funeral yesterday. The cliff notes are as follows:

As a grandson, my role is to take things from him and pass them down to my kids (besides the good looks of course). In thinking about this yesterday, 2 things dawned on me:

1) He rarely asked general questions like “How are you?” He would ask things like “Are you happy?” …I think I’d like to try and take that with me down the road. Obviously there needs to be a comfort level with someone before asking questions like that – but I do admire the fact of boiling down a question to what you want to know. To him – happiness was all that mattered. Not money or material things, not popularity or anything else. As simple as it sounds – he really just always wanted me to be happy with my life -- regardless of any of the details – and I would like to take that with me.

2) The man never seemed to worry. I can’t say he was 100% stress-free (mostly in thanks to my grandmother), but he always seemed to just take things as they came.

So, congrats on a great life Grandpa! You will certainly be missed most by your wife (Grandma Crannie), but Roz, Ron, Bruce, Ellen, Lauren, Jill, Fred, Amy and I will all miss you very much and will think about you often. I especially will have you in my thoughts when I go bowling or go to the racetrack.

Your perceptive and realistic understanding of your Grandpa is very touching to me. He was so proud of you, almost as much as I am. I love you.
Mom