Quick update / documentation on my 2010 Fantasy Football season ....  As many of you know - I take a great deal of pride in fantasy football - in particular - the league I have been commissioner for the past 13 years (The BigTime).

2010 was a remarkable all around year for my fantasy football efforts.  I was in three leagues:


Anyway - In all three leagues - I made it to The Finals in every one!  I am really proud of this and recognize that I sound like a complete geek - but I'm not ashamed to say it.
The end result:  We won the Funk Air and lost the other two in the finals - but again - still very proud of the overall effort.  I don't know if this will ever happen again which is one of the reasons I'm sharing on my blog... and ... here's a picture of Alexa and Daddy cheering on "The Commission" with T-shirts made by Tuna Glantz: 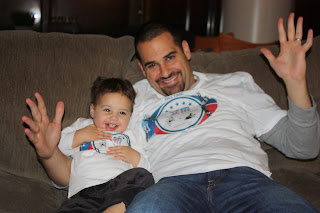