Amy and I are heading to South America for the next 11 days. We will be traveling to Buenos Aires, Iguazu Falls, Rio, and Buzios. Hopefully we will have plenty of pictures to share/post when we get back.

I'm not sure if I'm going to post while traveling, but in case I don't, I hope everyone has a Happy Holidays and New Year!!
Posted by BG at 3:18 PM 2 comments:

I was one of a handful of people who made it into my office today...although my company was VERY cool about working from home. When a got into the office, there was a false sense of hope for those that thought the drama was all hype... a few women I work with were saying how surprised they were because of how many cabs were OPEN ... I felt bad bursting their bubble, telling them that in fact the all cabs "available white lights" on them were on due to the fact that none of them were turning on their meters.... (Cabs are able to pick up multiple rides and are operating on a "Cost per zone" basis)

Anyhow, the day went by (with a few calls from out-of-town friends asking what was up)...
When the work day was over, Amy and I met up and walked home. Yes, the sidewalks were packed and I noticed a lot more bikers on the streets.... Yes, it was a little creepy going down Madison Ave where NO CARS were allowed to roam (for emergency vehicle sake), and yes there seemed to be A LOT of traffic in different areas.... However, there wasn't any rioting or people going crazy.... Just a lot of people in a small space... Pretty chaotic....

So now I am home and beginning to worry about tomorrow.... Not how I'm going to get to work, but how Amy and I are going to get to the airport during primetime traffic tomorrow night...
Stay tuned...
Posted by BG at 9:02 PM No comments:

A Rarity - A Quality SNL Skit

I don't think there is any debate that Saturday Night Live has been AWFUL for the past few years (we'll call it the Post-Will Ferrell era). Although there is a bright spot here and there, (such as Amy Poehler or Tina Fey) I have given up watching the show altogether...

Anyhow, today, someone sent me this funny skit from this past week that I wanted to share. (Warning - you may be singing the song for the rest of the week after watching)

In a news conference today, Stan Van Gundy announced that he is resigning as Miami Heat coach. Stepping in as coach will be current General Manager and previous Head Coach, Pat Riley….

As a loyal heat fan for the last 17 years, I am torn…On the one hand -- I really have grown to like Stan Van Gundy. He is honest and I always seem to respect his comments during post game interviews, etc. On the other hand -- Pat Riley is a coaching legend. I certainly cannot complain that the 3rd most successful coach of all time is taking over the reigns on my favorite team..

What seems to be at the heart of the public debate is whether or not he was FORCED to leave. Today, I watched (via webcast) the entire press conference. In case you missed it, Stan claimed he was resigning due to the lack of flexibility within his role ty to be a family-man… When you read the description “leaving for personal reasons,” I understand why people are skeptical, but after listening to him and hearing specific details – I do believe that he has had enough of the demand of putting his family as a second priority…

This being said, during the press conference, a reporter asked if the fact that the team was 10-11 had anything to do with his decision …. Stan was adamant that this has been a long time coming and had nothing to do with the record…. Sorry, Stan, I don’t buy that…. If they were 15-3, I think you put your inner feelings on hold at least till the end of the season… This coupled with the fact that Pat Riley is clearly an ego-maniac and has been dreaming of coaching again since we landed the Shaq-daddy… Oh and perfect timing – Shaq came back last night….

I think I’m somewhere in the middle of where the purists and the most of main-stream media will be ….
- I am sad to see Stan go, but also have no complaints about Pat Riley being the head coach
- I respect and believe Stan’s rationale, but I don’t think it’s 100% accurate to say that the teams lack of success had nothing to do with it
- I don’t foresee Stan coaching anywhere else other than in South Florida… That includes smaller colleges, high schools or even the Miami Heat again down the road…. His brother left and then came back….

Finally, Stan Van Gundy has consistently been said to look like adult film star, Ron Jeremy, but
I think I he looks more like my buddy Andrew Salis. Hard to say without the mustache, but I think it’s spot on…

I consider myself a low-maintence guy... This is not to say I don't appreciate the finer (read: more expensive) aspects of life, but I generally don't REQUIRE any of it to be satisfied.

Over the last 2+ years, business travel has been a fairly steady requirement for me. Nothing like my boy Brian, however. (He travels from Florida to Ohio every week - living away from his wife and baby girl Monday through Thursday). Anyway, the business travel has enabled me to accumulate some frequent flier perks every now and again.

Today, I type this from my plush Business class seat on my way back to NYC from SFO.

The first thing I noticed when entering "the zone" (ie. First class/business class) was that about 90% of the people "up here" are men. On top of that, I think almost all of these guys are wall-street types. I've already seen 2 Salomon Smith Barney bags and UBS briefcases...From the sounds of over-hearing conversations ... most of them either live in Conneticut or in the burbs of Northern California...
And then there is me...the young kid with his Google bag trying to fit in - so I break out my blackberry and act like I have important business to attend to... (I'm really playing video poker)...The truth is that once most people I sit next to in airplanes see my Google bag - that's it. Curiousity kicks in and the questions start...Sometimes what I really think they want to ask is..."are you worth a million or a BILLION dollars?" I then have to disappoint them by telling them I'm nowhere near close to either of those, BUT ..."I love what I do..."
Truth is, I can't even say that I think the "Google attention" is annoying. One would think that I get sick of answering (or avoiding) the same questions - but I don't... Perhaps more on this in another entry...

Anyhow, back to the perks of business class. You start by having the flight attendents take you jackets to be hung up (they will later bring it to me when the plane lands). I then sit in my cushy seat which has four different options of extended comfort (Recline, Leg-rest Extend, Leg-rest, and Footpad extend). About 5 minutes after take-off, I am served a nice cup of hot, salted nuts and choice of beverage (Jack and Ginger please). 5 Minutes later - round 2. 15 minutes later - round 3...(This is nice) Now it's time to grub...To start, some lettuce with a nice vinegrette dressing, alongside tomato and Mozzerella and a piece of multi-grain bread. Offer for round 4, but I opt for some water instead. Main course arrives (I chose the chicken over the beef and pasta). It's ok. Jack and Ginger part 4 arrives as well. Desert is a choice between a vanilla ice-cream sundae (with choice of hot fudge, caremel, strawberries, whip-cream and nuts) or a apple-carmel cheesecake. I chose ice-cream with strawberries.
Might I add that the "clean-up" process is almost instantanous upon completion. Quite a difference from coach - where I typically am forced to stare at the remnants of my $3 Snack box for 30 minutes.

Throughout the flight, if there is something I want (round 5 perhaps??) it's well within my reach. There are 2 flight attendents who seemingly only service this cabin.
Speaking of well within my reach ... I should be snooring outloud listening to the bankers next to me talk about the "upside or working for a large firm..."

Anyhow - before I make you snoor outloud - I'll get to my point...Although traveling in First/Business Class is certainly more than twice as good as traveling in Coach, I don't know if anyone on the plane today would pay double as much if it were on their own dime. I, luckily, was rewarded by the airline for my frequent travel. Most of the men sitting in first class now are rewarded by their companies for traveling cross-country. This being said, however you are able to swing it, I certainly recommend it.

On Friday (December 2nd), Amy turned 30. As most who move on to the 3rd decade, Amy wasn’t thrilled about the occasion, but I must say that once it actually came….she embraced it.

In celebration, we had a multitude events (in various locations) that ranged from a surprise party to a romantic dinner to a pre-party that led into a party throw-down… 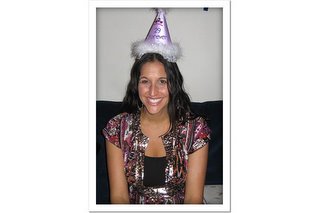 The “throw-down” as we’ll call it, was a blast. I know this, not only because I had a great time, but because I looked at pictures of the event… (and there were a lot of pictures). In almost every picture – people have enormous, genuine smiles…. And I’m not talking about the “hey let’s pose for a picture” type smiles … I’m talking about ear-to-ear grins from everyone (even those people that aren’t known for smiling very often)…

Organizing 2 weeks of festivities is never easy, but is something you do for someone you love, and I have to say that is was well worth it. Amy was so happy throughout. (see picture)

How many Jews are in this country?

Just ran across this random data and thought it was interesting...

I was actually fairly suprised how small that number was considering about 98% of my summer camp and about 90% of my college social scene was Jewish... :)
Posted by BG at 4:46 PM 1 comment: