In light of the recent Oscar's - I thought I'd rant a little bit about Movies and Prices. Being in the "advertising industry," I am quite passionate about the value commercial promotion brings to us consumers. Often scorned, commercials provide the ability for content to be created and viewed by masses, with limited investment to the end consumer... Television, Newspapers, Magazines, and the Internet -- all are highly subsidized by various companies that chose to market their products to us. Instead of a "thank you," the average consumer (myself included) fast-forwards television commercials, purposely prevent internet ads from popping up on your screen, etc.

Why am I telling you this? Well, because on all of those other mediums - the companies that bring that content to the end user - almost always pass along the savings to the consumer... Well, in case you are in an exclusive relationship with NETFLIX and haven't been to the movies in the past 2 years - the cinema has decided to take a stand and be the first to put the added profits into their own pockets...

Literally 30 minutes of "commercials" are shown before the lights finally get completely dark so that you can watch the feature presentation. 15 minutes of standard commercials followed by 4-7 previews. (In case anyone doesn't know me - I detest previews - they give away the whole movie...but more on that in a different entry) Anyhow, I would not have a problem with seeing all these ads IF my movie prices were going down instead of up. $10.50 for a movie here in NYC - And that does not include if you buy in advance - which, by the way, I really don't understand why they charge for this...When you buy plane tickets or event tickets early - don't they usually give you a discount?

Anyhow - to sum up my beef - movie theaters should either chose to show less commercials or lower prices....The only way I see that happening is if there is some competition. On Demand or straight to DVD never released movies?????? Yea - don't see that happening. Any other ideas?
Posted by BG at 11:12 PM 3 comments:

Amy and I recently went to Puerto Rico on vacation. Just figured out how to post pictures - so I put one below. The nice weather in Puerto Rico and hotel set-up (with casinos), along with the short trip (3.5 hours by plane) make it a great weekend get-a-away spot. I totally would recommend it for any couple or small group of friends looking to relax...And let me tell you -- the vacationers are not the only one's relaxing! Every person/empoyee/native we ran into was far from in a rush! 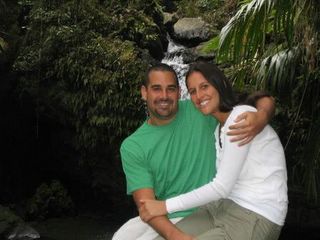 Amy and I on vacation in Puerto Rico
Posted by BG at 2:11 PM 2 comments:

Plus/Minus stat in the NBA

In this "Moneyball" / Fantasy game sports world that now exists - statistics in sports has never been more followed and studied by the masses. In the major sports where an individuals' statistics are determined almost solely on that individual (Baseball and Football), a player's value is largely judged on the stats they accumulate. Rushing yards, Touchdowns, Home Runs, Strikeouts, etc... (The one exception could be a Tom Brady who keeps producing the biggest stat of them all - WINS - but again, these are the small exceptions).
In other team sports like Basketball and the defunked NHL - a player could be highly valuable to a team without producing in the major statistic categories like points/rebounds/assists or goals/assists respectively. I believe that Hockey actually HAD done one thing right in their game by keeping the "plus/minus" statistic. For those who don't know, the plus/minus statistic is a simple equation: How did your team fare in goals while you were on the ice versus how did your team fare in goals when you were not on the ice. A player with a high "plus" number can be perceived as highly valuable as that players team obviously did better with that person on the ice...

I know that many NBA teams and coaching staffs (like Danny Ainge used to do in Phoenix) track this stat - but I think the NBA should have this as a standard tracked statistic by the league. Yes - I am a fantasy junkie - so I think it would be a great addition to that aspect of the game, but I truly believe that this stat could potentially tell a lot. Good defenders or "energy" guys could have a metric put against their value rather than relying solely on "fitting into coaches system," etc. This wouldn't completely change the game - but certainly could give guys who have different styles a better chance at making the league....

On a similar note: Shot out to Dave Stempler for sending me this cool site that tracks similar stats.
Posted by BG at 9:05 PM 1 comment:

After about 2 months from being traded, the Toronto Raptors today announced they have agreed to buy-out terms with Alonzo Mourning...Speculation has Zo returning to Miami to play with the Heat for a title run... I have 2 thoughts:
1) Why did Toronto trade Vince Carter again... ? For Eric and Aaron Williams (no relation) ?
2) Should the Heat really have strong interest in Zo ?

The first thought, I couldn't care too much about... Yes, VC has stepped up his game as of late - but wasn't of much value to the Raptors - as management obviously just wanted him out...

The second thought is of more interest to me, being a Heat fan since 1998 - I obviously love what Zo stands for, but I'm not expecting the Zo of old to appear. Although I was a bit bitter when Zo went to New Jersey to get one last payout, I'm hoping he comes to the heat and plays a role. 15 - 20 minutes a game, grabbing boards and giving Shaq and Haslem some breathers. We shall see how the story on-folds...
Posted by BG at 6:43 PM No comments: