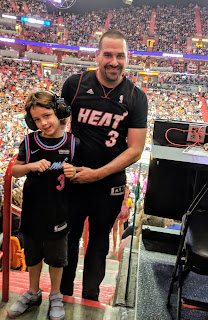 Over the past 2 years, I've forwarded a version of this post to over 25 people.  I thought it finally more efficient to just post something here and send this page instead.


The Paleo Diet (which is very Whole30-like) has been successful for me because it gives me guidelines.  It’s a heck of a lot more healthy way to eat, but it doesn’t have to be starving yourself.  I probably ate more food in the first months under paleo eating guidelines than I did before -- it’s just the eating right natural food combinations.


Here are the keys:


Here are the eating guidelines as they stand for me - you should definitely read more about it elsewhere too.


Another key for me was finding substitutes for the things not on the diet that I felt I needed in my every day eating.  I get a bunch of my go-to items from Thrive Market that helps with this - things like avocado mayo, salad dressing, ghee, coconut aminos, paleonola, etc.

Finally -- I took a stab at creating a 5 day meal plan starter here:

In my head, I often play the "if I didn't live in NYC where would I make sure I ate if I visited" game.
Having just come back from only my second time at Brooklyn Bowl, I can't say that I would add it to that rotation -- but -- I have started a new list in my head which is to create a "perfect meal" list... Obviously this will change over time (I probably would have put something from Macaroni Grill on the list 25 years ago), but thought I should document my thoughts.

So -- here is my perfect meal if I could craft it together:

Drinks from Angelo & Maxie's (RIP) - the drinks I drink pretty much taste the same everywhere (bourbon on the rocks with a splash of ginger ale) -- but there was always something about the drinks at Angelo & Maxie's that made me want to keep ordering them.

Dessert:
- Mini donuts from Stanton Social (?)  Kinda struggled with this one -- not really a desert freak.

I could be the last person of my generation I know of to do this, but today I finally convinced my wife to say good-bye to our monthly financial payment for having a "home phone number."

While I've been pushing to stop throwing away money every month on this - I understand the hesitancy.
According to my service provider we spent 9 minutes on the phone in the last 60 days - which btw sounded HIGH to me.  When she told me that included incoming calls - it made more sense given telemarketer activity.

So - If you have my home phone number associated with me in some way (phone, contacts, etc), feel free to delete that bad boy.  The Goffins are officially solely in the mobile era FINALLY.

As the 4 people who read this blog know....  I'm a Miami Heat Lifer as much as anyone who's ever been one. It is and always will be my favorite sports team and Mr. Dwyane Wade will likely always be my favorite player.  He brought us our first Championship and one cannot imagine a more franchise definition of South Florida, rivaling Mr. Dan Marino for sure.

Given all this - one would think I'd have to take the day off from work today given the news and status of the Heat-Wade relationship at the moment.  And yes - I would be really SAD if what is being discussed actually happened (him leaving for Denver or something like that), but I'm not sure I'd be MAD as it's truly a dilemma for the franchise.

I believe in the Heat management and organization at large and within this - I'm not blinded by loyalty.  So - here's a PRO/CON list to help communicate what I believe is a true tough decision (as was the Whiteside signing - but that choice was made already).

CONs
- He's clearly on the latter parts of the back 9 of his career (I'd say the back 4)
- He's a ball-stopper and he's a crutch for the team at-times.  The team played at it's worst last season when they just sat around and waited for D.Wade (or Joe Johnson) to do his thing.
- Paying him what he wants is likely to stifle the next 3-5 years of the franchise -- and there are truly some pieces in place particularly with Whiteside, Winslow and J. Richardson that are reason to balk beyond the current offer.

I've tried to put it in business terms I can relate to.  I work at Google and if another digital media/tech company came to me with a contract at a 30% pay increase for the next 3 years - I would certainly listen - yet I'd also weigh other factors in my decision making (the opportunity to learn/grow, etc.). While Wade may take more money for the next 3 years... he'd be cutting off roles in the Heat front office, etc - that I'm sure await him should he want that.  Just some things for him to ponder - and I won't be MAD at him with whatever decision he makes - although I may be sad.   I'm not sure how I'll feel if we over-pay him - but again - I gotta have trust in the franchise and as a HeatLifer that's what I'll do.

Nothing but love and respect for D.Wade - where-ever the decision may net out.

Feeling Old from a Radio Station

Most people feel old as it relates to music when they start saying things like "artists today aren't half as talented as they were when I was growing up" or things like that.

I had an "I'm old moment" with music yesterday but it didn't have to do with this.

While I was driving in my car in a city I don't live in -- I found a station that I loved.  Turns out - the station was branded as "The Throwback Station" and turns out this is common across the country and on streaming services, etc.

I guess it's the same as when I was younger when there were "80's" stations or much like "Classic Rock" became a subcategory of "rock" music -- "Throwbacks" have become a sub-category of "Rap/Hip-Hop."

I used to think that throwbacks were specific to Hip-Hop hits from the late 80s/early 90s -- but there's a "Throwback" station on Spotify that's only the early 2000s - and that's a "woah" (shot out to Black Rob).

Assuming I'm not alone -- but I'll embrace the Throwback station movement (and the concept of getting old).
Posted by BG at 12:49 PM No comments:

While the below is a personal story/gripe/complaint about a recent family vacation -- it’s a business story that I thought was relevant to this platform, especially given what I read about Restoration Hardware CEO last week. (Especially this quote: "WE CANNOT AFFORD TO LOSE ONE SINGLE CUSTOMER. NOT ONE. YOU WILL NEVER GET IN TROUBLE FOR MAKING A DECISION TO DELIGHT OUR CUSTOMERS. YOU WILL, HOWEVER, LOSE YOUR JOB IF YOU DON'T.")

Prior to one week ago, I was a huge advocate of the Beaches, Turks & Caicos “resort”.  I have taken my family there for the past 4 years.

My most recent trip, however, has changed my goodwill and future intentions. For those of you who are thinking about it for a family vacation (which is the only thing you should be considering it for) - here’s what you should be aware of given my 4 years of going there: Five Star pricing vs. Two Star Customer Service Experience.

While Beaches offers a unique kids-friendly facility, the prices are truly in the same range of the highest-end of resorts.  Most people (like me) have swallowed this recent upward trend due our kids enjoyment. The all-you-can eat inclusive meals that allow your kids to take every treat possible but only eat what they want, the Sesame Street show every night at 6:30pm, the water park of slides & lazy river located next to an ice cream shop that also has cookies and cotton candy….
When things didn’t go as planned, however, my Five Star cost was over-whelmed with “2 star” customer service.

The staff at Beaches (and Caribbean resorts stereotypically) is not what you would traditionally call empathetic or comforting.  It was very clear that the staff (even the most senior on-site management) are purely OPERATORS.  Their job is to fill rooms with appropriate room code. Customer service is not what they excel at and this is a major issue when the prices are what they are.
I’ll spare you the details of my personal gripe, but suffice it to say that it's an institutional problem.  Every level of customer service management did nothing to LISTEN to my issue.  They were merely defensive of their own position and that has just doesn't work for a resort that charges what they do.

I’ve paid more every year since I started going, and I wanted others to be aware of the trap.  If you go to Beaches in Turks and Caicos - you are likely to be paying a price that will not match the service.
Update since I wrote this: I emailed their CEO (guessing his email address) and was shocked to hear from customer service folks who said he forwarded my note on to them.  Not surprisingly though, their inevitable response back to me didn't address my ask.  They robotically just reiterated what the on-site staff had said and did not answer my questions.  So... the only thing I can do as a customer is to stop being a customer and write posts like this. That's it.
Posted by BG at 10:58 AM 1 comment: