Last night concluded 4 months of fairly intense boxing training. I'll take you through the brief version of the experience, but before I went it to that - I wanted to thank everyone who supported me throughout and those (including my parents and in-laws) that were beyond AMAZING fans at the match. I especially want to thank my wife - who through it all certainly wasn't sold on the idea, but supported me 100%.

In the beginning of June I got a forward from a long-time buddy who works at an ad agency. It was an application to participate in the Madison Avenue Boxing event. I have always enjoyed the sport of boxing and have been curious of what it would be like to get into the ring, however, I never had the balls to go through with it. BUT - here was my shot - so I went downtown and tried out.

Basically - the qualifications during try-outs were:
1) Do you have no or very little experience boxing (check)
2) Are you somewhat athletic so you can handle yourself throughout training (check)
3) Are you in a weight range where they can easily match you up with someone (check)

So I "made it" and started going down to the gym on the regular. "The Gym" is Trinity Boxing gym downtown. John Snow was our trainer throughout. John/Trinity donated their time and facilities FOR FREE to all of us who committed to the event("Four months free training" is really what go me to go down originally). As an aside - John was really great - he was hard on people when he needed to be, but also helped us get confidence when we need that too.

My outlook throughout training was all about losing weight. I had been pretty regular gym/treadmill guy for a year - but honestly wasn't seeing any results. I decided to switch it up. The first time I went in to try out - I spoke to a guy who was scheduled to box in the Wall Street event in the next week or two. He said he worked hard and it was an intense commitment - but he only sparred 4 times or so...(this was great news for me)

The first month of training was great. I went to the gym 4 times a week - hit the bags, did some drills, and did a bunch cardio. I think in the first month alone I lost 8 pounds... After every single practice, I would literally come home with my clothes weighing triple - as I say in the audio profile - I never sweat so much in my life.

In the 2nd month, the size of the "Madison Avenue Boxing pool" dwindled substantially... this is when we started sparring. So much for 4 times before the match - clearly John realized that more sparring was better than less (I think there were 3 or 4 KO's in the Wall Street event of the 8 fights) - and he decided to throw us into the fire early and often. Let's just say that I needed enormous confidence boosters almost every time after a sparring session. I SUCKED. I got cracked in the face repeatedly - and didn't think I did too much damage on my opponents. I literally felt like a punching bag...Towards the end of the 2nd month - I honestly contemplated quitting... My thought process was that I was far from a having a "fighter mentality" ... I obviously hated getting hit in the face repeatedly - and didn't even get so much joy from connecting with a punch of my own. I wasn't in it to win "the fight" - I was just wanting to lose weight - and by the end of the second month - I had already lost 10 pounds... I could certainly do without waking up every Saturday morning at 730 to go downtown and train/get beat up for 2 hours to start my weekend...

This said - I made a commitment and I was sticking with it. There were certainly times when I dreaded going into the gym and hearing John say "get your head-gear on" .... cuz I knew that meant I was going to have some marks on my face the next day ...I honestly could never look around at any of the guys training and say to myself "I could take that guy" ... I felt they were all hoping to fight me the night of the fight.... But through the third month I got some confidence. Not the confidence that was about being better than ANY of the fighters - but the confidence that I had come a long way and could hold my own. 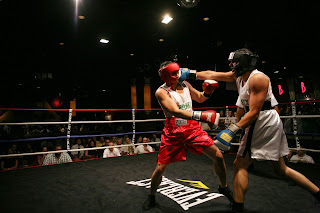 The weeks leading up to the fight were more anxious than anything else. I got tendinitis in both of my elbows (from missing thrown punches and from gripping my gloves to tight), so after every session - I felt like I had two dead-arms... I had trained hard - and I wasn't about to pull up lame a few weeks before...


People throughout always asked if I knew who I was fighting - and I honestly didn't know until 2 hours before the fight... I ended up fighting Jason from Satchi & Satchi. Him and I worked out a bunch and sparred a bunch during training. I think we were pretty even ... He got the best of me some rounds - I got the best of him some rounds - so it was a good match-up...

The actual day of the fight I was pretty tame. I was anxious for the fight to come and go. Again - my inspiration for the training had nothing to do with the actual fight. However, I had SUCH INCREDIBLE support from family, friends, and co-workers that I certainly wanted to represent myself well in the competition. The fear of getting knocked out or looking stupid certainly loomed in my mind...However... the day of the fight I said to myself that I wouldn't have changed anything in my preparation. I had no regrets - so there was nothing left to do but to go out there and try my best.

And that's what I did. The video of my fight is below - and while I didn't win the fight - I'm proud of the effort I put in during the 4 months. The interesting thing is that I was completely out of gas in the 3rd round (as you'll be able to tell in the video), but I don't think it was necessarily solely a conditioning thing. The adrenaline high was so great for so long - that in the 3rd round - the low of that high just took the wind from me. Jason and I sparred last Thursday and fought 4 rounds, and while I was tired during and after that, 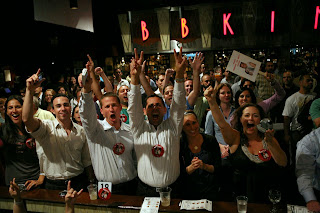 it was a fraction of what I felt during the 3rd round last night...


Finally, I again need to thank EVERYONE who supported me. As I've stated many times - I got into this to lose weight - but while I did accomplish that - the feeling of the incredible support I received from family, friends, and fellow Googlers was by far and away the best feeling of the entire experience. Amy, especially, was the usual most incredible supportive wife throughout the entire process (I think the "Bringin' The Heat Buttons" were more talked about than the actual fight - seriously).

I am proud of myself for the accomplishment - but I am more proud of surrounding myself and my life with such amazing people. Thank You!!

win, lose, or draw, brother- my hats goes off to those that put themselves out there! who the F gets in the ring and boxes. I LOVE IT. I'm certain that the # of pep who said "BG is nutz" is rather high, but that is what makes this all that much more rewarding. Tell all those suckers that the local bowling alley is forming a new Tuesday night league. YOU ROCK MAN

hey BG, sorry I couldn't be there. I watched the video and you did great. I can't imagine how tough that was.