It's a random goal to have, but I have always wanted to be on a cover of a magazine. Not in a "I'm so important" way ... but more in a "Something I think would be cool" way ...

Well - that goal has officially been attained, thanks to the November 2008 cover of Electronic Retailer Magazine. 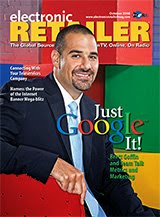 While I've bee quoted in a number of articles in my tenure here at Google - I've never been pictured on the cover or part of a cover story. I must say, it certainly is cool that my picture is on the cover, but I'm most proud of the article - in which Vi Paynich does a really good job encapsulating the many ways where Google is trying to make direct marketing more accountable and actionable in their efforts.

I've sent hard copies of the magazine to immediate family and some friends who I thought would appreciate it - but please let me know if you'd like a copy - and I'm happy to put one in the mail for you ...

Thanks to the ERA and Electronic Retailer Magazine for featuring Google in a lot of what they do and especially the November 2008 issue of the magazine. ;)
Posted by BG at 1:45 PM

Nice! Thanks for the autographed copy!