I had waited 18 years for last night... and I'm pretty sure it was well worth the wait.

The Miami Heat are far-and-away my favorite sports franchise of all-time. My father has had season tickets for the Miami Heat since 1988 - the team's inaugural season. I can name almost every player that's every worn a Heat jersey... I have battled through the cellar years (0-17 to start the season), the Knicks Rivalry (including being at "The Alan Houston shot" game), and everything else that has been the Miami Heat journey.

Last night was the franchise's first home NBA Finals game ever --- and I was there! Before the game even started - I turned to my dad and said, "I'm so glad I'm here right now" ... which in hind-sight was the under-statement of the evening...

As a quick overview -- the Heat have inspired me this play-off season by beating all of their prior three opponents in no more than 6 games...Since game 1 of the finals, however, they have been atrocious. They have lacked any sense of confidence and it this has been exposed by a very well-rounded and well-coached Dallas Mavericks team. 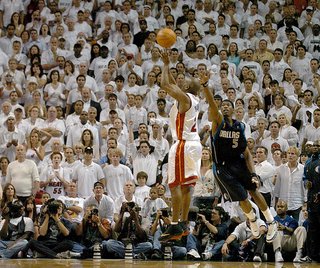 Now onto game 3 - In the first half, neither the Heat nor the Mavs looked very good - but the Heat was up by 9 at half-time, so I wasn't about to complain ... The third quarter was a big kick in the nuts ... Dallas outscored Miami by 18 points, flipping the 9 point lead to their advantage going into the 4th Quarter ... 10 minutes to go in the game, Dwayne Wade (already my favorite basketball player of all time after only 3 years in the league), gets his 5th personal foul... The Heat go down 13 ....
During a Heat time-out, my father looks at me and says "If Wade gets his 6th and this lead gets extended -- we're outta here" ... I felt like I got punched in the gut ... not by my dad's statement, but more because I started to feel like the Heat were really going to go down 3-0. But, I wasn't ready to give up ....So I turn to my dad and said "we're not leaving --- you gotta believe!! Do you believe??!!) .... And the rest is well documented in any sports journalism from today... Dwayne Wade was just as amazing as he has been all year .... Udonis Haslem and James Posey played some great defense .... Gary Payton reminds us that he's actually on the Heat... and a 90% Free Throw shooter misses a shot, when a 45% shooter makes two when it counts...

Regardless of what happens in this series -- I will never ever forget being at Game 3 of the 2006 NBA Finals. (Thanks Dad!) For those of you who know how passionate I am about the Heat -- you should know that this game certainly made that passion deeper (if that is possible). I'm an original Miami Heat fan - and will be one until I die...... LET'S GO HEAT!!!
Posted by BG at 2:41 PM