Let me start by saying IÂ’m not 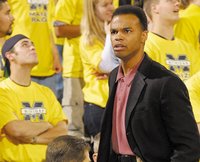 the biggest college basketball fan in the nation, but I do love my Wolverine hoop squad. It has been increasingly tough over the years in to believe in the basketball program. (I don't know - Brian Ellerbe just did not get me excited)


Enter Tommy Amaker from Seton Hall .. a former Duke guy who everyone loves. I was pumped. I didn'’t expect genius overnight, but I did expect to be competitive and to root for UM in a tourney game or 2. Well 5 years has passed and I'’m still waiting...

As I told mearliernd ealier this week... reallyly really want to like Tommy Amaker. He says all the right things -- He is certainly a stand-up guy... he seems to recruit very well. Again, I really want to like him. The problem is, he just doesn'’t appear to be a good coach at all. "Just not an X's and O's guy"” some may say... Losing 7 of your last 9 games due to sloppy play and turn-overs is a sign for bad coaching if I'’ve ever seen one. He has excuses (injuries, sanctions when he first got here, facilities, etc) BUT ... Good coaches don'’t use execuses. They get wins with the talent they have around them.

Not I'm not saying that I think Tommy should get the boot just yet ... But I would like to see a little sense of urgency for once! I feel like he is fully OK with not making the Tournament in 5 years. I would like to be patient with you Mr. Amaker - but if I have to follow UM hoops for 2 more years without making the big dance (which would make 12 in a row), I just may lose it.

Hire some assistant coaches with some in-game coaches skills. You can still be the face guy that everyone likes. PLEASE!

In a related note, did you see San Diego State go up by 15 in the second half, squander the lead, go down by a few points, miracuously go up by two with about 15 seconds left, have the point guard foul a guy shooting a three, go to overtime, and lose? Steve Fisher "coaching" at its finest.