Being gone for 11 days in a different hemisphere (covering 4 different towns/cities) spurs a lot of great blog material. This being said, I’d prefer not to post too long of a description of the trip, so instead, just tried to just give some bullet-points from each place. As a review, Amy and I went to , , Rio de Janiero, and Buzios. It goes without saying, but much props and love to Amy who not only made the actual detsils of the trip, but also made the trip complete for me..... Now to the review:

OVERALL
* The trip was AWESOME. I highly recommend almost everything we did, exactly how we did it to almost anyone. (For some single guys – you may have a different trip planned than we did)
* It was the perfect amount of time at each place with the perfect ratio between exploration (touristy stuff) and relaxation (beach)
* The weather couldn’t have been better. Was between 70 and 80 everyday and only rained on the last 4 hours of our trip – which we spent in a car going to the airport anyway.
* This was the first time that I have used a travel agent. Truth is that we probably didn’t necessarily save any money doing it, but, between the convenience and already-set activities, etc – it is NOT the last time I use one.

Now for a bit on each place…

– 3 Days
* BA is a major city. It has an exotic location flare-type sound to it, but it really is not a “tropical destination” (the closest beaches are 3 hours away)
* Hotel was great, Tango Show was a quality experience, and the food was very tasty… Especially the PROVOLETA and CHORIZO. (By far my two favorite)
* What made BA amazing was certainly my BA Friends (Picture below), particularly Lau and Manu. They both took Amy and I all around the City and showed us cool/trendy places as well as authentic/local joints. 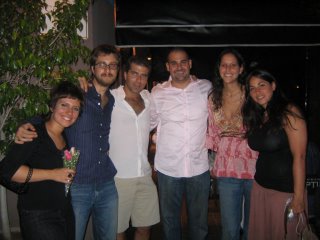 are the BEST and I look forward to doing the same with them when they come to New York. (Gracias Amigos!)

Iguazu Falls - 1 Day
* Came highly recommended by Amy’s Dad, Arie. (Particularly the boat trip – which we took and thought was awesome)
* Hotel with large mosquito issue was the only ghetto experience within the whole trip
* The Falls were pretty cool to see – although wouldn’t say this is a *must* if you are trying to shorten your trip

– 3 Days
* Our Guide of the city (Heidi) was AWESOME. On 2 separate days, we took 3 hour excursions where we were “supposed to go” (Pictures to prove it) Throughout this time, we asked a lot of questions about the country, culture, etc. She also gave us great recommendations on where to go to eat, where to sit at the beach, etc.
* Speaking of the beach… The vendors at the beach were so interesting to us. 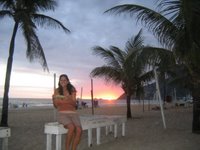 Amy made the great analogy of the vendors being very similar to vendors at a baseball game. Not in your face, but loud enough to let you know what they’ve got for sale. Amy did her part in supporting the “apparel vendors”, while we both did our part to support the food vendors (Cheese on a stick, GLOBO Chips, and Corn on the Cob were our favorites)

* The hotel () and area (Ipanema) were a perfect match for what Amy and I were looking for. We were across the street from the best beach in , in walking distance to great restaurants. One (Porcao – an All-you-can eat meat place), 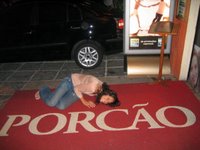 which just opened up 2 blocks from Amy and I. And yes – although Amy doesn’t eat meat – she loved it anyway. ;)

Buzios – 3 Days, including New Years
* The “Hamptons of Rio” – is a small, quant beach town (actually has 23 beaches) about 2 hours from
* We happened to be there during probably the busiest time of year… Every night, the streets were FILLED (I am talking about “leaving Giant stadium after a last second field goal” type feel walking the streets), mostly with Brazilian high-schoolers…there weren’t so many Americans.
* After visiting 4 crowded beaches our first day, upon recommendation, 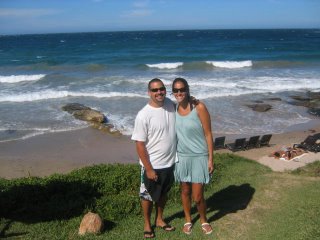 we found “our spot” at Pria Brava. We stayed there pretty much 10-6 for 2 days, got pampered by Lula (our waitress) … and it was VERY relaxing – was exactly what we were looking for to wind down our trip.
* We stayed in a very nice, boutique posada (Casas Brancas), which held a private dinner party for us on New Years Eve. With great views of the fireworks show and everyone dressed in white – (WHICH, by the way, Puffy totally stole the idea of a white party from), it made for a great New Years Eve.

That’s about it. Again – if anyone is looking to go to – let me know. I’ll forward you our itinerary! There was much anticipation about our trip, as we've been planning it for about 8 months, but I gotta say that it was well worth the wait!