I'm guessing this is something that my loyal readers probably are not aware of - but the subject and title of the first EVER blog post on this blog was: Alonzo Mourning (almost 4 years ago).

Yesterday, Zo announced his retirement from the NBA and I wanted to pay my respect. Before there was Dwayne Wade - there was Alonzo Mourning. Zo was the superstar and symbol of my favorite sports franchise of all time. I loved what he represented: Heart, Passion, Dedication, Hustle, Defense, Emotion... All things that I like to think define my own personal sad excuse for a basketball "game." 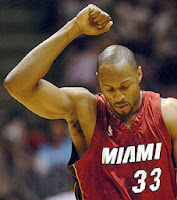 Zo is 10th all-time in the NBA in total blocks (shocked btw that Shawn Bradley is 11th). He is the Charlotte Hornets and Miami Heat all-time leader in blocks. He was a 2 time all-defensive player of the year. And...He owns a Championship Ring (his role in that will always be VERY under-rated. He was a man determined in the NBA finals in 2006).

Zo is most recently known for his courage and comeback with his rare kidney disease and he's ALWAYS been known in the Miami community as charitable with his time, money, and celebrity.

In his 15 year career, Zo had his ups and downs. I've written about this before, but he's certainly evolved as a player and role model. It wasn't always pretty - but I always knew that he took great pride in representing The Miami Heat - and he gave it his all ALWAYS.

I'm gonna miss rooting for you, Zo. Hopefully you'll continue to be a role model in the community and beyond. Much Respect!
Posted by BG at 5:06 PM