My Grandpa Hoover Goffin passed away this past Friday. After 91 years with us - he now joins my Grandma Ida in what we all believe is a better place. 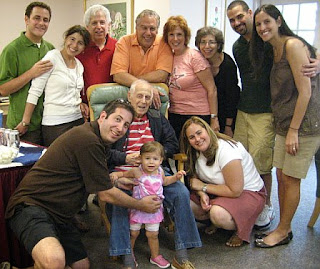 To me, my Grandpa Hoover was a simple and exceptionally warm-hearted man. "Such a nice man" was uttered several times since he's passed - and while that statement was the first one to pop into my mind when I started to think of what I'd write on this post - there is more to my grandfather than being such a nice man.

While I won't go into all these things - the things that come to mind first are:
I heard very recently at a funeral - that when someone you love and respect passes away, the best thing people can do to honor their life, is take a positive trait or two from that person (that also somewhere lies in yourself) - and anytime somebody comments on that trait -- you acknowledge that you learned this trait from the person who has passed...

A trait that is in me that was also a trait that I believe my grandfather lived his life by - was always unselfishly "doing the right thing." In my grandfathers case - he never made waves or wanted anyone to go out of their way for him. He held low expectations of what he "deserved" and conversely was willing to do almost anything asked of him that he could. He didn't pry into others lives - or judge the way others lived their lives. He was even-keeled and believed his way of life was "doing the right thing."

I like to pride myself in "doing the right thing." This isn't to say that I always actually do the right thing -- but it means that, like my Grandfather, I try and remove excess personal judgment or opinions when deciding how I should act in situations. And although my Grandfather was an educator professionally almost his entire life, this is never something he sat me down to teach me. How come? Well - I believe it's because he never wanted to tell either of my parents how to raise their kids or what to teach them. It was what he believed was "the right thing to do."

To me - this is his legacy to me. Sometimes mis-construed or even incorrect - it's not necessarily clear what is right from wrong - but - if what you decide is good natured and "right" is the basis for living your life... well then you should be able to fall asleep with a smile on your face every night.

And so, Grandpa, I know you fell asleep for eternity with a smile on your face. It may have been a few years longer than you expected - but you lived your life as best you could and as good natured as anyone I know. You will be missed and loved and never forgotten.
Posted by BG at 4:32 PM

What a lovely expression of respect and love for your Grandfather. I know your thoughts are with him and he is smiling from that better place.
Cindy

A beautiful tribute to your grandpa...your words have captured his essense.

I've known your grandfather and grandmother Ida as well as your great grandparents, the Lenoxs, for well over a half century. What I've learned from all of them is their dedication to family which you have continued.

And your grandfather Hoover was a positive example that all of us should follow as you have so eloquently expressed.