Like most summers, the weekends seem to "fill up" quicker than ever expected. July is wedding month for us, but this weekend we punched in for extra-time. Ally is on my moms side of the family, but her parents have also kept a friendship with my father, which meant that both my parents would be going to the same wedding for the first time since Jills. It also meant that they would both be up here for the same weekend, plus My Aunt, Uncle, and Cousin, add Steve's birthday, and Isabella's Christening - and you've got the "2006 BG-AT Can't Stop - Won't Stop Weekend." Check it...

Thursday
My cousin Snorin Lauren came into town for our cousin Ally's wedding. Lauren lives on the Left Coast and world travels as her day job (no joking), so it's not so often we get to see her. She landed on Thursday afternoon and so we met up for dinner with my sister and Fred. We went to a restaurant that opened 1 day earlier called Japonaise. (It comes by way of the Windy Cindy with a lot of hype) The overall atmosphere was pretty cool - and we were psyched that there was no "hype" drama. Amy got drunk on her 2nd martini and we all had a pretty good time. Food was touch and go and service was pretty bad - but- that is totally expected on day 2. (I'd go back there in a few months) JP came to meet us towards then end and we then went to Under Bar for a drink where my boys from high school (some visiting from FL) were randomly at. It was a great surprise - and was an overall great way to start off the weekend.

Friday
My friends from Florida were up this weekend mostly to hang with Steve - who celebrated his 30th bday on Friday. (As I told Steve Friday, he 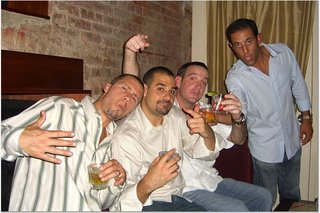 fits the saying "30 is the new 12) We started out by going to a small, family owned Italian joint for dinner. It was a great call - where the 14 of us were able to eat a good meal, hang out and celebrate Woodle's birthday. After dinner, we went to a GREAT FIND spot. Due to the desire to keep it under raps - let's just say this place was at The Nexus of the Universe. What I mean by "great find" is a cool, lounge spot that played great hip-hop, wasn't too crowded nor too empty, and had reasonably priced drinks. We partied and danced till 3 AM (Amy, Lauren, and I left before a few others, though). Overall was a great night! Pictures to prove it are available.

Saturday started the "Full Family wedding weekend" portion of the program. Brunch with my moms and Ron during the day, Amy-Lauren girly wedding preparation in the afternoon and then wedding at night. Another great time! (The Trifecta) Ally is a year older than me and went to Michigan - so - I happened to know a lot of people besides my family at the affair. Mix Free Booze, a reason to celebrate, and a bunch of friends/family - and that's why weddings are fun (versus the one's where you don't know anyone or aren't quite sure why you're there) . Of course, with our wedding planning in full-force (and having respect for Ally-Lee taste) Amy was on full detail-patrol. Well, I should say until she got her drink and dance on.... We ended up sweating most (but not all) of our liquor out by dancing (yes - i got down to some white music). Although I was talking a big game to go out afterwards (it was 2 AM), I was glad we went straight home -- I had a big Sunday planned that didn't include Home Depot or Bed, Bath, and Beyond....

Sunday
The first day that I woke up feeling a bit hung-over. (I had to decline brunch with my dad and about 9 others) A quick shower, cup of coffee and a bagel and Amy and I were off to Long Island. Isabella Danielle Fornaro got christened yesterday - which marked my first personal Christening experience (outside of TV and movies). Sure, there are times when I'm in a church when I obviously feel out-of-place, but for the families involved it is a very nice thing. Different from my experience with Catholic weddings, I was happily surprised with the 20 minute service (which encompassed 5 babies). From the church we went to The Elder's for eats and hanging out. It turned out to be a great day - although given how cute Isabella is - there really wasn't much time with her.... BUT ... Nic and Fab seemed very happy and that's why we were there. Turned out that Amy and I got some quality baby hangin time when we got back into the city to hang out with Syd Stern... She's cute everyday - but was extra cute yesterday with me finding a full-proof way to make her laugh! We hung out on the roof of my sisters building for about 4 hours (included ordering in pizza and salad) with my Aunt, Uncle and Cousin. After that - I was pooped... End of weekend....

Except - given all the plans, Amy and I were unable to really hang with my dad -- so we'll be doing that tonight...